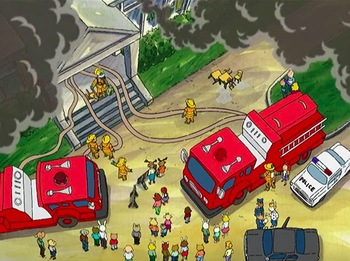 A big disaster and/or its aftermath are the main focus of either the whole plot, a given Story Arc, or a single episode that is often the season opener of the finale. The former is often the case of Disaster Movies while the latter is common for series of any kind and it's known as the Train Crash episode. Some long-runners and series with an overall disaster premise have a Big Disaster Plot contained in more or less one of their arcs.

Depending on the series' main focus, the disaster anchors the episode in one of two ways:

No matter the case, the disaster is prone to get covered in Radio Times or another such publication. Spectacular special effects are in no shortage to depict the consequences and the exact moment of the Big Disaster.

Common in the Medical Drama and Crime and Punishment Series. Compare Big Storm Episode, The Great Fire, and Disaster Movie. For plots that could be described as disastrous, see So Bad, It's Horrible.

The examples that crashed into this trope include: