Creator / Wizards of the Coast 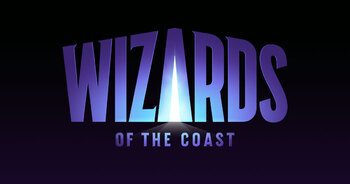 Wizards of the Coast is considered one of the most powerful names in Tabletop Games.

Founded by Peter Adkinson in 1990, it started off as a publisher of Tabletop Games, but really got its start when a fellow named Richard Garfield (PhD) showed up with a Collectible Card Game called Magic: The Gathering, the first prominent CCG and certainly the oldest one still extant. In 1997 Wizards bought TSR, manufacturers of Dungeons & Dragons, and have aggressively expanded the franchise to include things like Eberron. Two years later they released the Pokémon Trading Card Game worldwide after its success in Japan, leading to the infamous Charizard craze and converting millions of impressionable young minds into Pikachu worship until their license expired in 2003. They published the Legend of the Five Rings franchise for a few years but eventually sold it back to Alderac Entertainment. They invented an entirely new card game to allow their Japanese franchised Magic manga to have an anime adaptation without actually using Magic in a way that they didn't entirely approve of, turning it into Duel Masters. Through the original AOL-based Neverwinter Nights, they have had also influence on the MMORPG genre; D&D's 4th Edition was deliberately designed to echo aspects of online gaming. In 1999 they were purchased by Hasbro, where they have remained ever since; in fact, under Hasbro's guidance they have absorbed Avalon Hill, which produces Axis & Allies and Risk 2210 AD (among others).

The company has an interesting track record at times; though many of its games (particularly the ones mentioned above) have been wildly successful, it also has a list of flops which is about twice as long (although quite a few of those flops (Netrunner, for example) were fondly remembered, and only flops due to market saturation). It also applied for and was given a highly-controversial patent on the idea of "tapping" a game card to show it has been depleted somehow.

Products published by Wizards of The Coast: