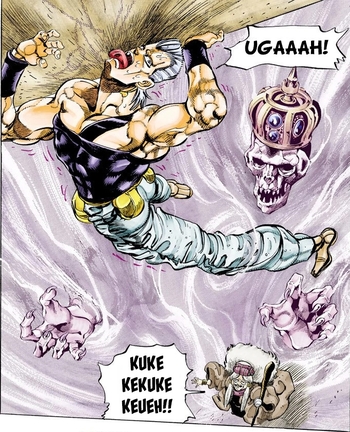 In case you weren't sure if this fog was evil or not.
"I don't know what happened to Antonio Bay tonight. Something came out of the fog and tried to destroy us. In one moment, it vanished. But if this has been anything but a nightmare, and if we don't wake up to find ourselves safe in our beds, it could come again. To the ships at sea who can hear my voice, look across the water, into the darkness. Look for the fog."
— Stevie Wayne, The Fog
Advertisement:

This isn't normal mist that comes at a bad time, obscuring vision or providing dramatic tension. It's certainly not that serene mist that comes just after a gentle rain... no, this fog is malevolent and out to get you.

Everyone knows that an Ominous Fog is a bad sign in movies, books, and television shows. One of the most sure-fire ways of generating that edgy feeling of paranoia is to enshroud the setting in a dense, opaque mist. Because anything could be hiding in there...

An Ominous Fog turns into a Fog of Doom when it's hostile. Sometimes the fog itself is the threat. No mere mist, the Fog of Doom is often poisonous, acidic, or causes men to go mad. Other times, the Fog of Doom conceals other threats that come out of the mist to take you so quickly that your friends don't even know you're gone until they look around and see you're not there.

Either way, you'd better avoid walking into a mist at all costs.

This trope can also include other sight obscuring conditions such as dust storms, supernatural darkness, or smoke; fog is simply the most common mechanism to achieve the effect.

For things that can turn themselves into smoke, see Super Smoke. For ordinary poisons, see Deadly Gas. For malevolent clouds, see Cumulonemesis.