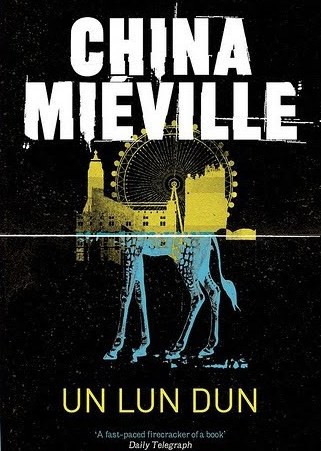 A fantasy novel for Young Adults by China Miéville.
Advertisement:

UnLondon is the shadow of the city it is named for, one of many abcities that collect the mildly obsolete detritus left behind by the citizens of London. UnLondon, and other cities like it, are places where the broken and neglected discover new purpose. It is a world in danger. The Smog threatens to choke the life out of every living thing it can find, to feed itself and drown the world in darkness.

Enter Zanna and Deeba, two ordinary girls who find themselves in UnLondon after a string of events lures them there. Zanna is the abcity's chosen one, the Shwazzy, who will ultimately destroy the Smog and save UnLondon. Unfortunately, the Smog knows this as well as the good guys, and injures Zanna before she can fulfill her destiny. Deeba, the Funny Sidekick, takes on the quest meant for Zanna. Helped by an abandoned milk carton and talking book of prophecy, Deeba must save the abcity and get back to regular London before everybody back at home forgets she even existed.

This book inverts, subverts and plays straight every prophecy trope in existence and is even the Trope Namer for The Unchosen One.