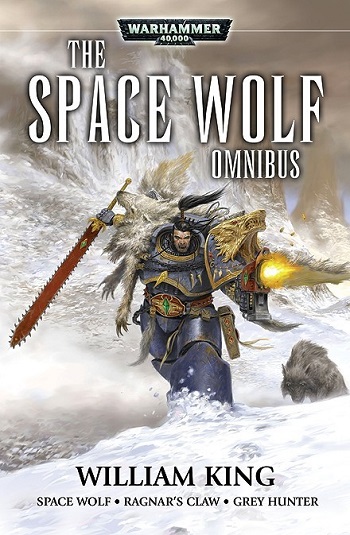 "War Within. War Without. War Unending. That is how we live, little brother. That is who we are."
— Bulveye
Advertisement:

Space Wolf is a series of Warhammer 40,000 novels centered on Ragnar Blackmane, a member of the Space Wolves— a feral, but surprisingly nice, chapter of Space Marines living on the Death World of Fenris. Or even more concisely, they're Vikings IN SPACE with a wolf motif.

Works include Space Wolf, Ragnar's Claw, and Grey Hunter, all in The Space Wolf Omnibus (aka Space Wolf: The First Omnibus), and Wolf Blade by William King, and Sons of Fenris and Wolf's Honour by Lee Lightner (collected in Space Wolf: The Second Omnibus).

Not to be confused with Spice and Wolf, the furry comic Space Wolf or Star Wolves.

Also check out the character sheet.