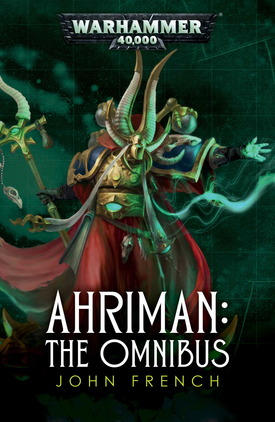 The Thousand Sons are a Legion of Chaos Space Marines in Warhammer 40,000, which have a trilogy of books written by John French, centering on their most famous member, Azhek Ahriman. The first book, Ahriman: Exile, features the eponymous Ahriman having been exiled from his Legion after casting the infamous Rubric of Ahriman. Meeting up with a group of Space Marines whose Chapter was declared renegade, he takes them into his service when the Brotherhood of Dust, a Warband composed of several of his former battle-brothers, begin hunting him. The second book is Ahriman: Sorcerer, and features Ahriman, now a powerful warlord of the Prodigal Sons, seeking to undo the damage the Rubric had done by seeking the Athanaeum of Kalimakus, which holds the words of his Primarch, Magnus the Red. The third book, Ahriman: Unchanged, sees Ahriman and his warband trying to return to the Planet of the Sorcerers to cast the second Rubric. Another sequel, Ahriman: Eternal sees the Progidal Sons attempting to correct their past mistakes with Necron technology.

The story was collected in Ahriman: The Omnibus in 2017, along with the short stories "All is Dust", "Hand of Dust", "King of Ashes" and the novella The Tale of Ctesias.