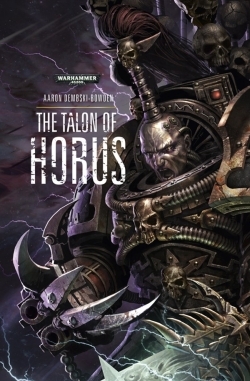 It's time for Abaddon to get badass.
From shame and shadow recast. In black and gold reborn.
Advertisement:

Black Legion is an ongoing Warhammer 40,000 book series by Aaron Dembski-Bowden detailing the backstory of the eponymous legion and their commander, Abaddon the Despoiler.

Iskandar Khayon, one of the founding members of the Black Legion, has surrendered himself to the Inquisition. Imprisoned and bereft of sight, both physical and psychic, Khayon tells his story to a transcription servitor.