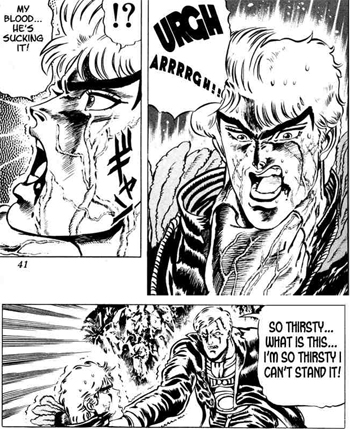 Don't feel bad. Dio happens to be a lawyer.Note And an actual vampire later on. Literally a bloodsucking lawyer.
"The hunger felt by an undead with the need for sustenance is akin to an addiction. Like living creatures with an extreme craving for some chemical substance, hungry undead are prone to erratic, violent, and sometimes self-destructive behavior if they are denied their preferred morsels."
— Dungeons & Dragons, "Libris Mortis: The Book of Undead, Chapter 1 All About Undead"
Advertisement:

The human body is a remarkable machine, but it doesn't just run on energy. Ask any dietician: it requires vitamins, minerals, and a plethora of other substances in specific doses to run at peak efficiency. So what, pray tell, does a supernatural or alien being require to operate at its normal, super human efficiency? Why, humans!

These creatures don't just need to feed on humans to get their powers or keep a human shape, but very likely to survive. And to make matters worse, this humanitarian diet comes with a relentless, insatiable, and ultimately irresistible hunger. This is the driving force behind a lot of the evil in supernatural creatures. The Horror Hunger can only be sated by feeding on (parts of) other humans; (non-human) animals are rarely a viable substitute, and if they do work, they taste horrible. These are not your Friendly Neighborhood Vampires.

Speaking of vampires, any person unwillingly changed due to a Viral Transformation and trying to be a "good" vampire, werewolf, or whatnot will have a very hard time of it, since starving themselves will likely cause them to lose control and attack the nearest person, loved one or not. If they're being starved by enemies like the Hunter of Monsters, this is an incredibly effective and cruel torture. These supernaturals trying to be good will also have another hurdle to cross... Evil Tastes Good, and Delicious Distractions are everywhere. So not only are they starving themselves, but they're like hungry children locked in a candy store... where the candy is people. Even in cases where the supernaturals don't need to consume humans to survive, the Horror Hunger creates conflict and provides an explanation for why the Friendly Neighborhood Vampires find it so hard to quit.

The hunger isn't always for humans or humans per se. At times, it can be for Phlebotinum, especially if it has to be harvested from humans, like with Liquid Assets or Life Energy. Even if it's a hunger for something that doesn't harm humans directly, it can still be extremely dangerous. Perhaps feeding somehow damages the environment, the addictive elements and danger of death are still present, and/or it likely causes With Great Power Comes Great Insanity. The Phlebotinum Muncher and Psycho Serum addict likely suffer from Horror Hunger regarding their choice substance.

Oh, and in case it isn't obvious, expect the Horror Hunger to be used as a metaphor for addiction.