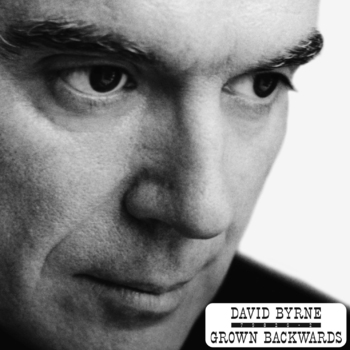 "Something familiar, something far, far away."
Advertisement:

Grown Backwards, released in 2004, is the sixth solo album and seventh studio album overall by Scottish-American musician David Byrne. A marked contrast from the Latin-infused Alternative Rock of his prior solo output, the album sees Byrne shift to an acoustic Baroque Pop sound, taking the orchestral art pop style of Look into the Eyeball and ramping up the "orchestral" part even further, growing more acoustic and deviating far from any trends in mainstream music at the time. As stated on his personal website

, Byrne had only a passing interest in Classical Music and opera, but was curious enough to experiment with the style, eager to step out of his artistic comfort zone.

Upon release, the album didn't do much to restore Byrne's commercial fortunes; in fact, its No. 178 peak on the Billboard 200 was Byrne's lowest chart placement in his entire studio album discography. In the UK, it reached a more favorable No. 88 peak, though even this was lower than its predecessor. Despite this, it would continue to sell steadily over the years: according to Byrne's book How Music Works, the album eventually racked up sales figures of 140,000 units (including 127,000 physical copies) by 2010. While not enough to meet any RIAA certification, it was still enough of a Sleeper Hit to lead to an expanded double-LP release— its first issuing on vinyl— in 2019.

Grown Backwards was not supported by any singles. That said, a re-recording of the X-Press 2 collaboration "Lazy" (which was released as a single for the house duo's 2002 album Muzikizum) is featured as a bonus track.

We will return your tropes to you: