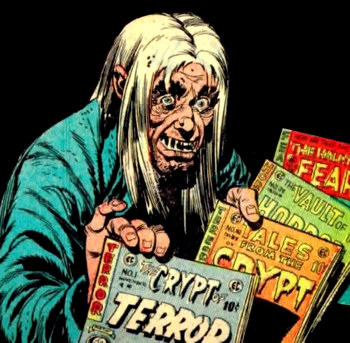 The Crypt Keeper, hawking EC Comics' wares.
"AHAHAHHA! The doctor is in! It's your ghost host, with the most! It's Dr. Wolfenstein!"
— Dr. Wolfenstein, House of 1000 Corpses
Advertisement:

The Horror Host is a narrator who presents harrowing tales to his audience. This eerie character first appeared on radio serials, creating continuity between otherwise unrelated stories. Horror Hosts then spread to horror comics, most notably EC Comics titles like Tales from the Crypt. Soon these Hosts appeared in movies, and then television.

During the 1950s and 1960s, a horde of Horror Hosts haunted television viewers across North America. There were hundreds of local presenters on low-budget shows based around cheap B-Movies. Sometimes, the host trope was used to tie together otherwise unrelated material into a single episode for broadcast. By the 1980s, the genre had nearly died out completely — possibly due in part to changing audience tastes, but more likely due to general cost-cutting that resulted in the end of most locally-produced non-news programming in favor of syndicated fare. While not as popular as it once was, by the late Aughties and The New '10s Horror Hosts have made a comeback in the form of Video Review Shows, Caustic Critics who talk about their favorite horror movies in honor of the Rod Serlings and Elviras of their childhood.

The Horror Host often takes a sadistic glee in the events of the story, and cannot resist making the implication that the reader might meet a similarly dire fate. He may become an Interactive Narrator, but is usually content to stay at home, whether it be a tomb, a featureless void hung with paintings, or a broom closet with a cardboard coffin. The Horror Host may be grotesque in some manner, possibly with a backstory of his or her own, but ultimately most Horror Hosts are presenters, not protagonists. Their personalities are revealed in various skits, often featuring Black Comedy, morbid props, and puns. These asides usually comment on the themes and morals featured in the episode, making this an example of a Framing Device.

Instead of a Nightmare Fuel Station Attendant, the presenter may be The Stoic, and remain aloof. The one thing the presenter won't be is scared. In a Live Action TV context, the Horror Host is often the mock-sinister antithesis of the Excited Kids' Show Host. More recently, this character has been fictionalized, appearing as a 'type' in films and movies, or being parodied by characters within a show, often as the introduction to a Halloween Episode.