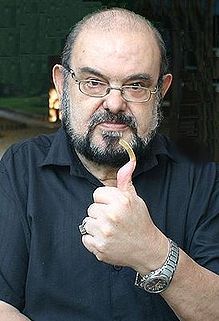 José Mojica Marins (March 13, 1936 – February 19, 2020) was a Brazilian filmmaker, actor, composer, screenwriter, and television and media personality. Marins is also known for creating and playing the character Coffin Joe (loosely translated from Zé do Caixão) in a series of horror movies; the character has since gone on to become his alter ego as well as a pop culture icon in Brazil. Although Marins is known primarily as a horror film director, his earlier works were Westerns, dramas and adventure films.