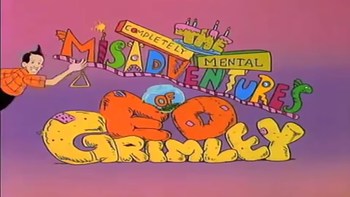 The Completely Mental Misadventures Of Ed Grimley was a short-lived Hanna-Barbera series from The Renaissance Age of Animation based on SCTV and SNL alumnus Martin Short's popular sketch character. Along with the Coneheads and David S. Pumpkins specials in 1983 and 2017, respectively, it's one of only three animated adaptations of a character from either of these sketch shows and remains the only one to have been made into a children's series.

Ed Grimley is an overly-optimistic nerd, with his highly unfashionable sense of style, questionable speech patterns and odd obsessions, such as playing the triangle and watching Wheel of Fortune, who gets into strange adventures and takes everything that happens around him, no matter how weird, with good nature and aplomb.

In this adaptation, Grimley lives in an apartment in a converted Victorian house with his goldfish Moby and pet rat Sheldon, upstairs from his cantankerous landlord Leo Freebus (Jonathan Winters) and his much nicer wife Deidre (Andrea Martin). Other recurring characters included Ms. Malone (Catherine O'Hara), an attractive, yet airheaded amateur actress with whom Ed is infatuated, and her loudmouthed kid brother, Wendell (Danny Cooksey).

The show's plots always started out mundane (such as Ed heads to his aunt's house for an afternoon of board-game playing or Ed goes to return a library book) before descending into cartoonishness (Ed gets swept away and finds himself in a farmland that looks like the one from The Wizard of Oz or Ed accidentally signs up for the military and becomes a comedy star when a Bob Hope-esque comedian known for entertaining troops chooses him as a second banana). All the while, Ed would narrate his feelings on the situation and use his good nature and, occasionally, bizarre interests to get himself out of the situation.

The show had two other segments: the live-action Count Floyd's Scary Stories, featuring fellow "SCTV" alum Joe Flaherty as the bumbling vampire host of a children's show who told supposedly scary stories, most of which made no sense; and the animated Amazing Gustav Brothers, two scientist brothers (played by Winters and Charlie Adler) who would attempt, sometimes successfully, to tie in a science lesson to the main story.

The show only lasted one season, mostly due to the Writers' Guild strike of 1988 and the fact that it was created to compete with the then-ratings powerhouse Pee-wee's Playhouse. Short unsuccessfully proposed moving the show to prime-time for a second season, due to all of the Parental Bonus humor. It later did reasonably well in reruns on Cartoon Network and its sister station Boomerang.

Some pretty decent tropes, I must say: