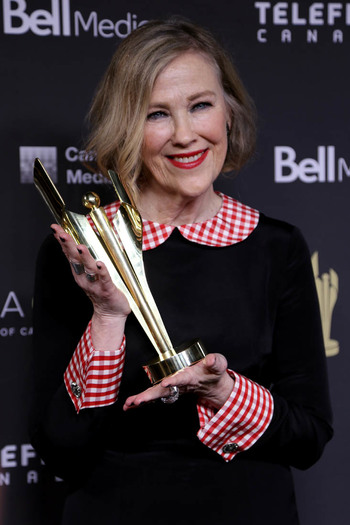 She was a member of the Second City troupe in Toronto that would go on to create the sketch comedy series SCTV. She would have been a cast member with Saturday Night Live after NBC stepped in to retool the show following Jean Doumanian's tenure in 1981, but O'Hara decided to stay with SCTV. There is a long-standing story that controversial SNL writer Michael O'Donoghue scared O'Hara off by screaming at everyone for ruining the show and spraypainting the word, "DANGER!" all over her dressing room door, but O'Hara has gone on record and stated that she passed up being an SNL cast member because she wanted to stay loyal to SCTV, which was about to air on NBC in the early 1980s.

Since then, she has had done several movies, some of them having involvement from Tim Burton. Among her most well-known roles is playing Kate McCallister in the first two Home Alone films. She also stars as Moira Rose on CBC's Schitt's Creek, opposite long-time collaborator Eugene Levy. In 2020, O'Hara won Best Actress in a Comedy Series as part of Schitt's Creek's 2020 sweep of the Emmy Awards. She and Levy previously won in 1983 for writing SCTV.

Her husband, Bo Welch, is a production designer.