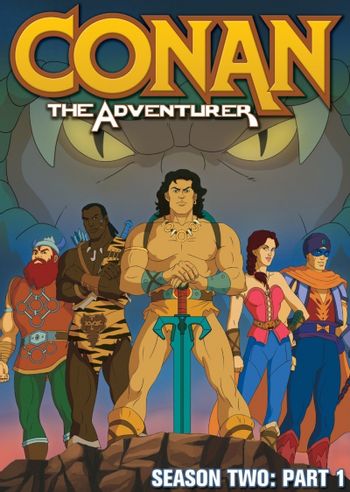 An Animated Series loosely based on Conan the Barbarian (hence the title), but so very much Lighter and Softer than the original it should be considered more a generic fantasy series that merely borrows inspiration from Conan. The cartoon ran from September, 1992 to November, 1993, for a total of 65 episodes.

Thousands of years ago, the demon-god Set ruled the earth as an immortal tyrant, served by legions of monstrous reptilian humanoids called "Serpentmen". However, a mighty warrior-wizard named Vathalos led the other White Wizards of the world in a rebellion against the demon-god and sealed him and most of his minions away in the Abyss. Unfortunately, some of Set's minions, human and Serpentman alike, escaped the purge and slunk into the shadows to prepare for the day when they could release Set and reclaim the world.

None of this is of any concern to Conan, who is a mere youth apprenticed to his father, a blacksmith, in a peaceful mountain village in Cimmeria. One day, a strange celestial event results in a great shower of shooting stars; while they hit all over the world, several of them land at Conan's mountain, whereupon Conan's father forges the "starmetal" they contain into weapons and makes a profitable business selling them, saving one piece, a mighty broadsword, for Conan. This sword is concealed in a stone sarcophagus, and Conan is told that he will be ready to wield it on the day that he can remove it from its resting place.

Unbeknownst to the Cimmerians, Wrath-amon, the High Wizard-Priest of Stygia and Lord of All Serpentmen, has been told by Set that starmetal holds the key to undoing the spell that keeps the demon-god sealed away, and he immediately sets to gathering the substance for his master. Several years after the starmetal shower, Conan's village is attacked by Wrath-amon's minions, led by the dark wizard himself. Conan runs to retrieve his sword, and finally manages to free it, but returns too late to help, forced to watch as his father, mother and grandfather are transformed into stone statues by Wrath-amon's evil magic. He vows to never rest until his family are restored, and while leaving the mountain, he stumbles across the tomb of the sage Epimetrius, still haunted by the ghost of this ancient wizard. The benevolent spirit tells Conan the reasons behind Wrath-amon's attack, and gives him a companion in the form of a fledgling phoenix named Needle.

And thus the journey begins... As Conan proceeds to wander the earth and battle Wrath-amon's evil, he makes numberous other allies, including the Vanirman Snagg, the shuriken-tossing acrobat Jezmine, the warrior-wizard prince of the Wasai Zula, the wind-magician Greywolf, and the winged whip-wielding warrior Falkenar.

Later the show was given a "sort of" sequel in Conan and the Young Warriors, where Conan acted as a mentor to a group of three chosen ones who are destined to rule over the realm of Hyboria.

Conan the Adventurer provides examples of: