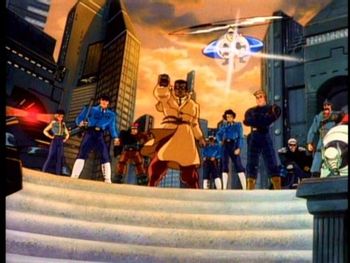 Set in the year 2020, the show took place in the metropolis Empire City. The main story revolved around Agent Baldwin P. Vess, codename "Bulletproof", who has been sent out to stop Big Boss (no relation), a criminal mastermind who has taken over the city. However, after being attacked by the henchmen of Big Boss and suffering a near-fatal wound, Vess is taken to the hospital and given a new bullet-resistant torso. While he is recovering, he contacts Officer P.J. O'Malley (a.k.a. LongArm) and rookie Donny Brooks (HardTop) to find the best law enforcement officers around. They are able to recruit several people. Among them are David E. "Highway" Harlson, Colt "Mace" Howards, Stan "Barricade" Hyde, Tina "Mainframe" Cassidy, Walker "Sundown" Calhoun, Suzie "Mirage" Young, Hugh S. "Bullseye" Forward, and Rex "Bowser" Pointer and his robot dog, Blitz. Together these people make up C.O.P.S., using their combined power to stop Big Boss.