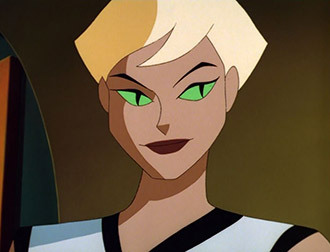 "It's, like, such a bummer that 'Snake Eyes' was already taken. Dude doesn't even have real snake eyes!"
Advertisement:

This character doesn't have normal human eyes; for any of various reasons their eyes are like those of an animal. They may have slit cat eyes, compound insect eyes, glossy and bulging fish eyes or piercing bird's eyes, among a menagerie of possibilities.

These eyes may be just for show, a mere cosmetic difference brought about through a Partial Transformation, genetic alterations or a spell. Frequently, and especially for bird's eyes, they carry Super Senses related to sight.

The Beast Man and some Little Bit Beastly will have eyes matching their particular choice of animal. In Sci-Fi settings, characters who are Human Aliens (including some Rubber-Forehead Aliens) may also have unusual eyes. In these two cases, this is to silently remind the audience that the character in question is not actually human.

See also Hellish Pupils, which may be shaped like those of a cat, goat or reptile. See also Supernatural Gold Eyes, when golden eyes show a supernatural connection. Not to be confused with Fish Eyes, Puppy-Dog Eyes or Animal Eye Spy. The inverse of this would be Cartoony Eyes, in which animals have eyes that are human-like (although very exaggerated or simplified).

Being a Winged Humanoid, Skellig's eyes have nictitating membranes (inner eyelids) like an avian.

Being a Winged Humanoid, Skellig's eyes have nictitating membranes (inner eyelids) like an avian.