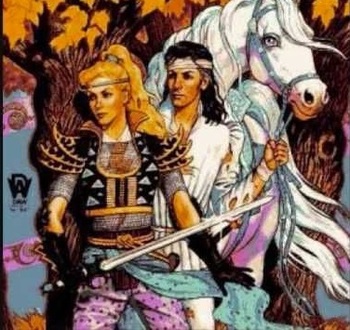 The Heralds of Valdemar is a Fantasy novel series written by Mercedes Lackey. The series is linked by its setting rather than focusing on a core group of characters; it covers roughly 3,000 years of history, all told. It is written mostly in the form of trilogies that do focus on a particular character, although there are a handful of independent novels as well.

The majority of the series revolves around the Kingdom of Valdemar and its protectors, the eponymous Heralds of Valdemar. Heralds are Heroes of one stripe or another Chosen to defend Valdemar from the current Big Bad. Sometimes they have to go on The Quest for the MacGuffin that will save Valdemar, other times they have to root out The Mole or discover whatever Applied Phlebotinum solution they need to save the day. Almost always, it's a Coming-of-Age Story as well.

An important aspect of the Heralds of Valdemar is their Companions. Companions are, in essence, Cool Horses with human-level intelligence and telepathy. They deliver the Call to Adventure to new Heralds by instinctively seeking out and recruiting youngsters with latent Gifts and good hearts, and always find the one person for whom they were meant Because Destiny Says So. This usually happens at just the right time to get the newly Chosen trained just before the kingdom needs them.

Mercedes Lackey is also an award-winning filk singer, songwriter and lyricist, which means Valdemar also has a rich folk music tradition of its own. Most of the books list complete lyrics for the songs referenced within, and several books have companion albums containing this music as well as other songs inspired by the events and characters within, all published by Firebird Arts and Music.

Now has a character page, which is under construction! To contribute, please click here!

open/close all folders
Major novels in the Valdemar series, in roughly chronological order:
Anthologies and other works:
The Music:
Due to length, the list of examples has been split: