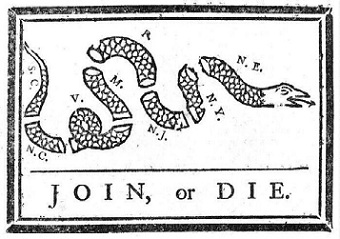 America needs to pull itself together, literally. (Except Georgia, apparently.)
"We must, indeed, all hang together, or assuredly we shall all hang separately."
— Benjamin Franklin, July 1776
Advertisement:

The Evil Overlord is about to conquer the country, and The Rival is more concerned about his personal feud with the hero. He may not realize the danger. He often disbelieved either because of his resentment, or honestly, not trusting The Hero. But the damage is real even so.

Malicious Slander often fans the fire. The Rival may perpetrate it — or just be extremely gullible, blinded by his dislike for The Hero. Can also be egged on by Divide and Conquer tactics by the real enemy.

Heroic counterpart of Enemy Civil War — though, obviously, at least The Rival is not usually very heroic. Enlivens the life of many a hero, though.

The better sort of rival will come to his senses with the enemy actually at the gate, but not without doing heavy damage to the cause first. However, often, Redemption Equals Death. Not always. Sometimes, at that, The Hero learns An Aesop about how people can legitimately suspect him without being evil. Either way, Teeth-Clenched Teamwork is likely to ensue — though that may lead to Fire Forged Friendship and prevent reoccurrence. The Leader can sometimes resolve it earlier by trampling objections.

The worse sort may actually become the Turn Coat, undergoing a Face–Heel Turn. This shifts them out of the ambit of this trope. Obstructive Bureaucrat and The Resenter frequently cause this.

Contrast With Friends Like These..., where your ally is only your ally because the two of you happen to be fighting the same villain at the same time; this has deadly serious effects, and also can be carried out with perfect courtesy all around. Contrast Enemy Mine, where someone who is usually an opponent is willing to work with you against a common enemy. Contrast Sour Supporter, who will work for you, but just to let you know, he thinks you're insane. When The Hero and The Rival work for different organizations, Interservice Rivalry may be involved. Supertrope of We ARE Struggling Together and A House Divided. See also Ignored Enemy, Rebellious Rebel, Headbutting Heroes, Let's You and Him Fight, Who Needs Enemies? and Not-So-Omniscient Council of Bickering.