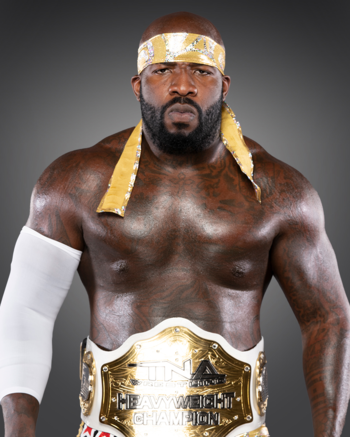 Quinn Ojinnaka (born April 23, 1984) is an American professional wrestler and former American football player, known by the nickname and eventual ring name Moose. He is best known for his tenures in Ring of Honor between 2014-2016 & is currently signed to Impact Wrestling since 2016.

Prior to his pro wrestling career, Moose played in the NFL for teams such as the Atlanta Falcons, New England Patriots, St. Louis Rams just to name a few between 2006-2012. After he departed the NFL, Moose would go on to become a professional wrestler, trained under Mr. Hughes and making his national debut at ROH's Best in the World PPV. He would be with ROH for a couple of years until he debuted with Impact Wrestling in 2016 to which he would initially align himself with Mike & Maria Bennett and after they parted ways, Moose held the Impact Grand Championship 2 times.

Later in his Impact career, he 'won' the previous TNA World Heavyweight Championship belt to which he held for most of 2020 and later became a literal world champion for Impact as a result of Scott D'Amore sanctioning the belt in February 2021 until he was defeated by Rich Swann (Impact World Champion) in a unification match.