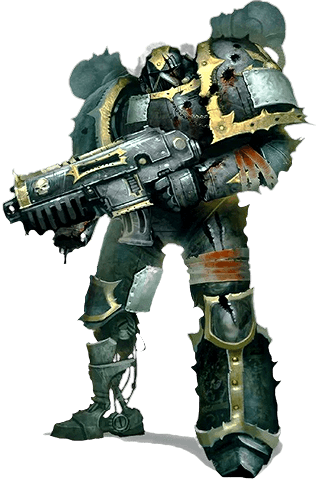 Performing maintenance might be common sense, but it's also HERESY!
Captain Rex: Looks like we got ourselves a batch of shinies, Commander.
Echo: Shinies, sir?
Commander Cody: That's right. Your armor — it's shiny and new. Just like you.
— Two high ranking soldiers point out the New Meat by their lack of this trope, Star Wars: The Clone Wars
Advertisement:

Badass characters get thrown through the wringer all the time. To show the ordeals that they have been through, the equipment they use is just as scarred as they themselves are. This tends to be a way to contrast the newbie/fresh meat who has the unused equipment with the veterans whose armors are proof of experience. More realistic works have their Cool Car with scrapes and dings. Fantastic works have their body armor and weapons scratched and pitted from battle.

Don't be surprised if someone looking at that equipment has a What a Piece of Junk reaction.

Compare Rugged Scar, Good Scars, Evil Scars, Dented Iron, and Every Scar Has a Story for scars on one's person.

See Used Future and Wrecked Weapon for other equipment maladies.