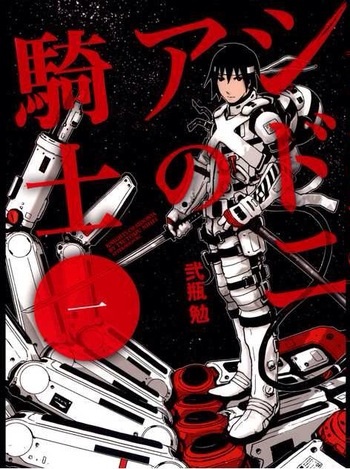 It's 106 Astronomical Units to the Lem System. We've got a full tank of Higgs Bosons, half a magazine of Artificial Kabi, it's dark and we're wearing catheters.
Knights of Sidonia is a manga from Tsutomu Nihei, creator of Blame and Biomega.
Advertisement:

The story takes place on the gigantic Generation Ship Sidonia, where the last remnants of humanity are engaged in a seemingly Hopeless War against a race of monstrous shapeshifting aliens - the Gauna. Nagate Tanikaze has lived in isolation in the bowels of the Sidonia his whole life, with only his recently deceased grandfather and Garde pilot simulator for company. Facing starvation, Nagate journeys to the surface in an attempt to steal from a food processing plant, before being injured and captured by local authorities. Upon discovering his "grandfather's" storied past as a previously important Garde pilot, the government puts Nagate on the fast track for elite Garde pilot training. What follows are Nagate's attempts to fit in with civilized society, his growing relationships with his fellow students, and his growth as a pilot in the face of the horrifying threat of the Gauna.

premiered on April 10, 2014, produced by Polygon Pictures, the 3DCG studio behind Transformers: Prime and Star Wars: The Clone Wars, as its 30th anniversary work. Notably, it was licensed and dubbed by Netflix as one of their "original" shows. It was later announced that Sentai Filmworks got the license to release the series on home video.

A film conclusion to the anime titled Knights of Sidonia: Love Woven in the Stars was released in Japan on June 4, 2021.

, with Funimation rescuing it

to stream on their site from August 3, 2021, while also licencing Love Woven in the Stars for theatrical release in the U.S. & Canada from September 13, 2021.

Knights of Sidonia ended in September 2015, after 78 chapters.

Not to be confused with Knights of Cydonia by Muse, or the mecha anime about literal knights from Mars.

Be warned that this page contains unmarked spoilers.

This Manga and Anime contain the following tropes: