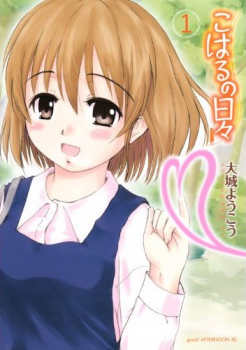 After school, Akira Torii is heading home on a subway. A girl, Koharu Mutsuki, from his school trips, and he catches her. He helps her pick up her books, and then promptly leaves to go home. The next day at school, he starts running into her. She's incredibly grateful and praises him constantly. Akira is quite happy with this... until he walks into his classroom and sees her enthusiastically licking his recorder. Given that this is not exactly normal behavior, he tries to avoid her, but when his female friend, Natsuki sees her, she convinces him to proceed in the relationship, unaware of the girl's strangeness.
Advertisement:

A somewhat unusual Slice of Life romance, Koharu no Hibi ("Days of Koharu") is a manga by Youkou Ooshiro, which ran in the seinen magazine good! Afternoon from 2009 to 2012.