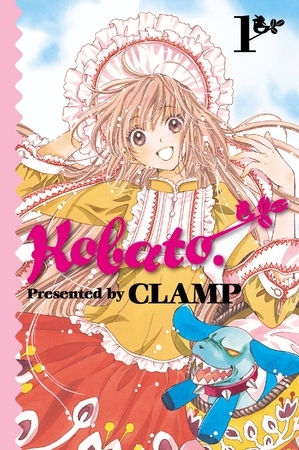 Please let me heal you!
Kobato Hanato has a wish. There's a specific place she wants to go to, but she is unable to travel there. In order for this wish to be granted, she's been tasked with filling up a large glass bottle with healed hearts. Her progress is overseen by Ioryogi, a foul-tempered blue stuffed dog who has his own reasons for seeing Kobato succeed: if she doesn't fill the bottle before the end of the fourth season, he and his colleges will be permanently stuck in their current, less powerful forms.
Advertisement:

To start her quest, Kobato is dropped into a small but thriving city. At first, her attempts to help the troubled all fail; earnest and cheerful though she is, she lacks a certain amount of common sense. In fact, she winds up being helped by Sayaka Okiura, a gentle woman who runs and teaches at a local kindergarten. She hires Kobato without any reservations, something that irks her employee Kiyokazu Fujimoto, a handsome young man with a sarcastic streak.

As her days at the kindergarten unfold, Kobato will learn what it truly means to heal wounded hearts... and maybe even fall in love.

Kobato. (こばと。) is an urban fantasy seinen manga by CLAMP. It started serialization in Monthly Sunday Gene-X in 2005 before moving to Monthly Newtype in 2006. It ended in 2011, finishing at six volumes. Yen Press released the English translation of the series.

A 24 episode anime adaptation premiered during the Fall 2009 season. Production was handled by Madhouse. It is available for streaming on Amazon Prime.