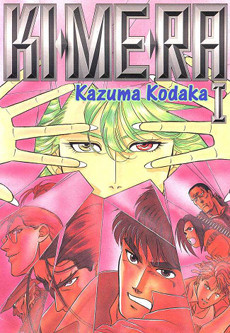 Ki*me*ra is a seinen manga written and drawn by Kazuma Kodaka, which was serialized in Super Jump from 1995 to 1996 and compiled into two volumes.

The manga follows a man named Osamu who falls in love with an androgynous vampire-like alien named Kimera, being held by the Air Force and hunted by two other aliens. One wishes to use Kimera for his hermaphroditic nature as the mother to revive their dying race, while another wishes to kill Kimera to save him from a fate Kimera did not desire.

An OVA was produced by Toho in 1996. Both the manga and OVA were licensed and released in English by ADV Films.