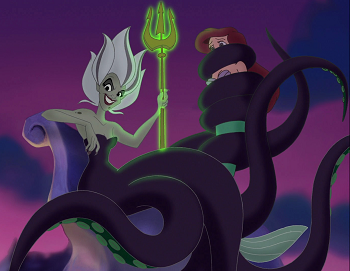 Looks like Ariel is all tied up at the moment.
Advertisement:

Basically when tentacles are used to grab and restrain. Can be played for laughs or horror; seeing a character get muffled by a pissed-off octopus can be hilarious, seeing a character get crushed by said octopus, not so much. Often used in cartoon Slapstick comedy such as Tom and Jerry, it's a cheap way to get some cartoon violence in without shedding blood. And often it is just a cheap way for a villain to restrain the hero.

As for the horror aspect, getting grabbed and devoured by something alien enough to have tentacles has been the subject of human nightmares probably for time immemorial.

Related to Combat Tentacles, only these are specifically for grabbing and binding, and not for other forms of attack. Often part of Typical Tentacle Tactics.

A Sub-Trope to Bound and Gagged. Compare Variable-Length Chain, Whip It Good, Standard Female Grab Area, Spider Limbs. Contrast Knotty Tentacles, where the one with the appendages is the one being tied instead.