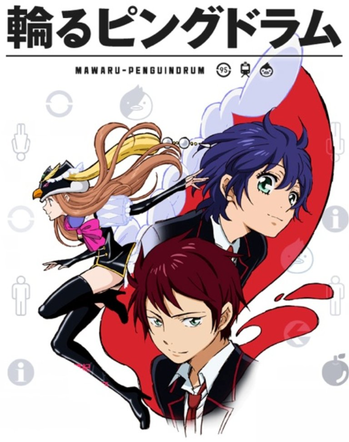 Because, ever since that day, none of us had a future. The only thing we knew was that we would never amount to anything.
—The opening narration of the first episode
Advertisement:

Penguindrum, known in Japan as Mawaru-Penguindrum (Spinning-Penguindrum) is a Summer 2011 Original Anime directed and co-written by Kunihiko Ikuhara and animated by Studio Brains Base. It has character designs by the manga author Lily Hoshino, and the original series has also spawned a series of novels (written by Ikuhara and Kei Takahashi) that are being released alongside the anime. Sentai Filmworks has licensed the anime (under the name Penguin Drum) for release starting at the end of 2012.

The story follows the three siblings of the Takakura family: twin brothers Kanba and Shouma, and Ill Girl Himari. Their parents are gone, and they live in a small bungalow alone. Poor Himari dies during a trip to the aquarium in Ikebukuro; while Kanba and Shouma grieve over her death, she is suddenly brought back to life by a mysterious entity (one who apparently resides in a souvenir hat purchased at the same aquarium) who offers them a chance to extend Himari's life for a price: to bring her the "Penguindrum."

At the same time, they receive three mysterious penguins who understand the orders of the Takakura siblings. The only clue given to them by the Penguin Hat is to follow a certain Ringo Oginome, a girl the same age as the boys who also has a huge obsession with their teacher and tries daily to win his love by reenacting out the next entry of her (oddly accurate) diary...

Yeah. This show is very weird.