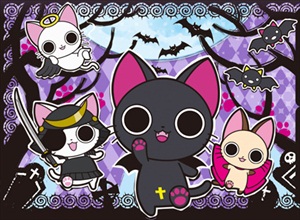 Nyanpire the Animation is a short anime that aired on the channel "Kids Station" for the Summer 2011 season. It is notable for being GONZO's first production since Shangri-La and Saki from the Spring 2009 season. This anime originated as dōjinshi manga by yukiusa called "The Gothic World of Nyanpire" which is still running in Japan.

The story follows a cat who was about to die, but a vampire gave it some of its blood, making the cat immortal. However, Nyanpire must now live life in the home of a girl called Misaki as a vampire, and like all vampires, Nyanpire needs to drink blood.