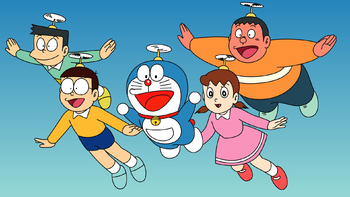 Starring children — and made for them too!
Advertisement:

Kodomomuke translates from Japanese as "intended for children" and predictably indicates anime and manga aimed at children younger than the typical 12-18 shonennote Literally, "shōnenmuke" in Japanese and shoujonote Literally, "shōjomuke" viewers. Kodomomuke works are generally aimed at the 3-to-10-year-old range and are usually more gender-neutral than shōnen and shoujo. This sort of media often makes the transition from Japanese to Western audiences with fewer changes, being more easily comparable to most of your typical G-rated children's cartoons than shōnen and shōjo anime are.

One indicator that a show is of kodomomuke fare is if it spawns a kiddie ride shortly after launch, although given that even shows like One Piece and Gundam have spawned rides, it's not even a reliable indicator.

None of this is meant to imply that you need to feel odd about liking anything on the list. Enjoy yourself! We won't judge you.

It's important to note that most anime that don't air in late-night timeslotsnote Although there are a few exceptions, such as the 2018 Cardfight!! Vanguard series. are "kodomomuke".note Like other countries of the world, Japan typically thinks of anime and manga as mainly being for families, although there are, of course, many, many exceptions. However, because of cultural and societal differences (and because of how ambiguous some shows can be at times anyway), it may not come off this way.note It doesn't help that some shows released in North America have subtitled or dubbed versions that have characters swear (something that technically does not exist in Japanese), just because of certain terminology used. In some cases, some shows are even deliberately translated in a way so that they can appeal more to older viewers despite originally being family-friendly. In a few cases (especially if it's a Gag Dub) they may not even bother, and just go their own way, regardless of whether it's family-friendly or not. This list only covers shows that could potentially air outside of Japan with little, if any edits or other changes.

Compare to Preschool Show, which several of these anime go under. Many of them, however, are more equivalent to shows aimed at elementary-schoolers (not unlike most of the western cartoons you probably watched on Saturday mornings as a kid); these older-skewing kodomomuke shows may cross over into shōnen or shoujo territory on occasion.