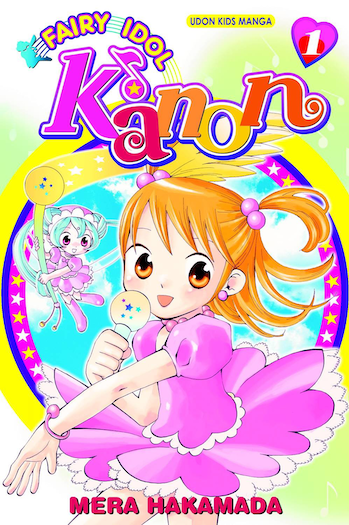 Fairy Idol Kanon is a 2003-2006 manga series created by Mera Hakamada (known for The Last Uniform). UDON Entertainment licensed all four volumes into English throughout 2009-2010.

The story follows three 10 year old girls from Hinoura Elementary School—Kanon Kohinata, Marika Amano, and Kodama Yagi—who meet a fairy from another world that relies on the power of music. Princess Alto has come to the human world from the Kingdom of Sound to find pure singing voices to help save her land, which is in danger due to a lack of them. Wanting to help Alto, the three girls decide to form an idol group and spread the power of their voices throughout Japan.

Tropes in Fairy Idol Kanon include: