Anime / Mega Man: Upon a Star 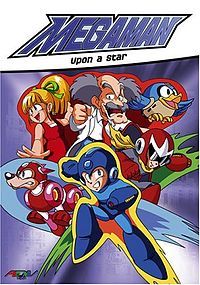 Mega Man: Upon A Star is the collective name given to three Mega Man (Classic) OVAs by Ashi Productions. They were dubbed by The Ocean Group, who would later work with the Mega Man cartoon; the OVA had influence on the production of the show.

As for the OVAs themselves, they were created to teach kids about Japan.

The first OVA is called Appearance in Japan. One day while playing Mega Man 5, Yuuta Kobayashi is forced to pause the game and go to bed. Dr. Wily takes advantage of this opportunity to escape the TV and wreak havoc on the world, or at least Tokyo. Mega Man travels with Rush, Yuuta and his sister Akane to stop Wily, and in the process, learn about Japanese culture.

The second OVA, Wishing Upon A Star, has Wily escape the game world yet again. This time Mega Man is joined by Proto Man, Roll, Dr. Light, and Beat, as they learn about Japanese holidays, such as Setsubun, and stop Wily from using a meteor shower to destroy Japan.

The third OVA, Future Beware, has Wily creating a Bad Future due to robots that can cause natural disasters. Again, Mega Man must stop his plans, traveling through time to see when the disasters happened and how to stop them.

These OVAs provide examples of: