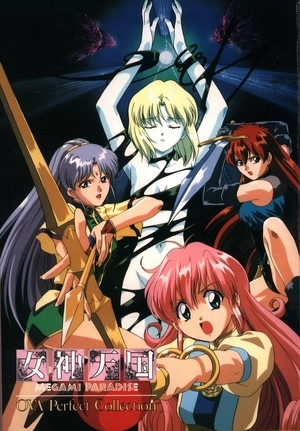 Megami Paradise is a Magical Girl Original Video Animation based on an Role-Playing Game.

The story takes place in an all-female utopian world, ruled over by the Mamamega, who is in charge of the Astro Star, a magic item that absorbs all the evil in the land and keeps it a nice place to live. Whenever the Astro Star reaches its limits of evil-absorption, the Mamamega purifies it and hands it and her leadership position over to the next Mamamega. As the story begins, the newly appointed Mamamega has chosen a young woman named Lilith to be her primary shrine maiden and has tasked her with recruiting two more shrine maidens. However, no sooner has Lilith formed her group when they encounter a rival group of women who are plotting to conquer their utopia and put the Astro Star to more nefarious purposes.