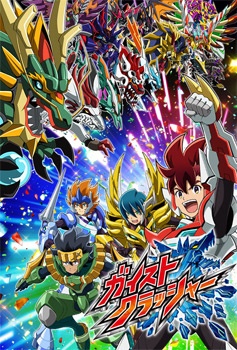 The story takes place 20 Minutes into the Future. A new crystalline energy source has been discovered, but with it comes a breed of rampaging monsters: The Gaist. By using the materials that the crystals are made of, the government has developed Powered Armor that allows people to stand a fighting chance against these monstrosities. These soldiers have aptly been named Gaist Crushers.

An anime by Studio Pierrot began airing in the Fall 2013 anime season, written by Reiko Yoshida, better known as the person who was the head writer of Digimon Adventure.

An action RPG of the same name was later released in December 5, 2013, along with merchandise, some of which are 'Gai-metal' that can be used in the game.

Two manga series were released: the main adaptation of the anime, and Gaist Crusher First, a prequel to the main story that focuses on Rock Volcan's earlier years.

A sequel, called Gaist Crusher God was announced and was released on September 4, 2014. You can see the trailer here