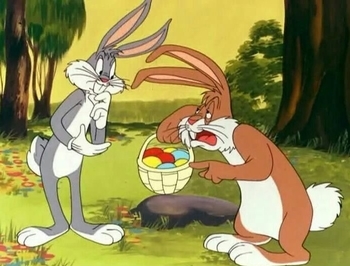 They don't call it the Easter Duck, now do they?
Advertisement:

In your world, Santa Claus, The Grim Reaper, the Easter Bunny, the Tooth Fairy, or any popular mythical figure actually exists, but something happens which causes them not to be able to actually do their magical duty. Perhaps they fall sick, possibly they've been kidnapped, maybe they've died in an accident or perhaps the legend wishes to teach someone a lesson in humility. Maybe it's a case of Someone Has to Do It and there is only one who can step in when Death Takes a Holiday. Who'll step in? You, of course! Subbing for Santa is when the protagonist of a story takes the mantle of a mythical being and takes over their job, even if it's just temporary.

This is not when a character is infected by a creature and so becomes that creature, like with some vampires or some werewolves. The mythical task has to be explicitly given or falls upon the protagonists because of the circumstances of them maybe being in the wrong place at the wrong time or maybe because they're the only one who can at that moment.

In the event of an inversion, a character will steal the mantle of the mythical figure in order to reap the benefits or the glory for their own. In such cases, the main characters may need to save Christmas or lives, or the world even in order to set things right.

Compare: Usurping Santa, for when characters sub for holiday figures for more malicious reasons, You Kill It, You Bought It, Someone Has to Do It, God for a Day, Saving Christmas and Death Takes a Holiday. Supertrope to Relieving the Reaper. This trope may also lead to An Ass-Kicking Christmas.

US? SAVE CHRISTMAS!?- Tom

US? SAVE CHRISTMAS!?- Tom