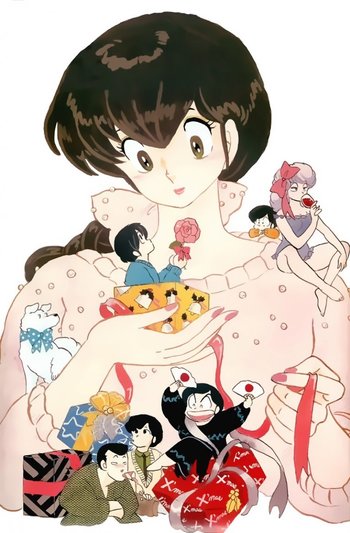 Where wacky hijinks can't stop a great romance!
"Hi, how's it going? The name's Yusaku, but they all call me by my last name, Godai. I'm what you'd call a ronin, a student who couldn't pass the college entrance exam. That means I get to cram for another year before I can take it again. This is Japan, remember, and you know what they say: good school, good job, good life. Usually, I do my best studying on rainy nights like these. Well, that is, before I moved into Maison Ikkoku..."
— Yusaku Godai
Advertisement:

Yusaku Godai is a lovable, somewhat serious, but hopelessly inept Rōninnote in today's term, a NEET who is trying to study to pass college entrance exams while living at Maison Ikkoku, a somewhat run-down boarding house. His own disorganized, gormless lifestyle does not make this an easy task. Neither do the antics of his neighbours, including a party girl, an older mom fond of the bottle, and a surreal mooch, all of whom use his room for their frequent booze-ups. The building manager has not been seen in some time. Godai finally has enough and is walking out the door, bags in hand…

…and in walks Kyoko Otonashi, a beautiful, sweet-tempered woman who announces herself as the new manager.

In order, Godai's suitcase, jaw, and heart hit the floor, and from then on it's a roller coaster ride of strangeness, complications, botched courting, miscommunicated feelings, and every so often some achingly sweet, poignant moments.

Running from 1980 to 1987 in the seinen magazine Big Comic Spirits, Maison Ikkoku clocks in at 15 volumes – lengthy, but actually the shortest of Rumiko Takahashi's major works. Compared to her other series, it is very true-to-life, at least of the time period in which it's set, and rarely strays into fantastical scenarios – very little Love Dodecahedron, no supernatural hijinks, convoluted logic, or most of the standard trappings of Takahashi's better-known series. The anime adaptation by Studio DEEN aired for 96 episodes from 1986 to 1988, which is also short compared to the lengths of other anime series based on Takahashi's works, though it still manages to cover the manga's whole story.

The series has a history of struggling in North America. An English dub of the anime was started in the mid-90's, but cancelled after 36 episodes due to low VHS sales. The subtitled tapes stopped at Episode 64 for the same reason. Years later, Viz Media gave Maison another chance after Inuyasha exploded in popularity – they miraculously managed to put the entire series out on DVD and finally finish the dub (albeit with several cast changes due to the long hiatus), but sales were never strong; it got so bad that the only reason the final boxset came out at all was because retailer RightStuf.com offered to buy the entire print run. The manga was released twice –- once in "flipped" collections with a few chapters cut away to get the story going quicker, and then again a few years later in "unflipped" volumes that included the cut-away chapters and that matched the Japanese books… but quickly fell out of print afterwards.

However, Viz announced they will be releasing the Collector's Edition of the manga. The first volume was released on September 15, 2020.

Nonetheless, the series received great reception among those who did see/read it, and it enjoys a passionate cult following in the States among anime fans, especially Takahashi fans, who often claim it to be her magmum opus.

It has inspired many similar series, among them Love Hina and Mahoraba.