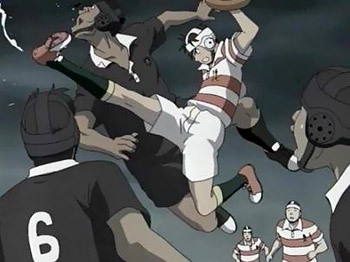 Rugby is one of several games that Americans, for the most part, do not get. (It's OK, people who get rugby often do not get American football.) While the two games look broadly similar there are three facts about rugby that tend to stand out:

For this reason, much media depicts rugby as an agonizing slaughterhouse that will put you in Ward 4. This depiction is not confined to American media either. Nations where rugby is played a lot tend to compare it to other football codes and often come to the same impressions. Furthermore, the global rugby community seems to revel in their sport's reputation, taking perverse joy in the fact that the very mention of its name is enough to make football (association and American) fans squirm.

There are elements of truth in this. In every single rugby game, players have to leave the field because of an injury. There is even a system concerning bleeding players - they have to leave the field immediately to be replaced by a teammate, but the original player can return within 15 minutes if the bleeding stops without it counting as a substitution. They have afforded the same luxury to suspected head injuries due to long-running concerns about the long-term effects of concussion.note The mandatory medical test for concussion that happens at this point is seen as a bit nanny-state by South African players, who dismissively refer to "the ding-dong check". You get a distinct impression the Bokkies consider this superfluous and unnecessary. That said, even in Rugby playing circles the Boks are considered a particularly special brand of maniac.

In the end, the truth of the matter is that both American football and rugby are about equally as dangerous to the players per minute of the match played. It's the risks, and the type of fitness needed, that are different. Namely, American football often revolves around players making headlong sprints into one another, which are the main reason why padding is necessary. In rugby, on the other hand, hard hits of that sort are less common, with tackles generally involving pulling the other players to the ground as opposed to knocking them down. The result of this is that, owing to the strict rules about forward passing and the lines being in much closer proximity, meaning that players usually don't pick up much speed before being tackled - and only players with the ball can be tackled. Also, historically, those who do tend to pick up speed, the backs (especially the wingers) tend to be smaller and slighter - however, this is now changing, with some wingers both weighing over 100 kg (220 lb), and collision speeds approaching 20 mph. As a result, historically, rugby has tended to have a higher rate of scrapes, cuts, and gashes than American football, the concussion rate is lower (though it does seem to be increasing - whether this is simply increased diagnosis or a trend remains to be seen) — a fact that isn't lost on many rugby organizers, especially those in American youth leagues seeking to market it as an alternative to football that won't cause the concussions that that sport is notorious for. A short truism is that American Football has lots of padding and very few restrictions on what you can do to people, while Rugby has no padding and lots of restrictions about what you can do to people (admittedly, most of those have been instituted since the turn of the millennium).

For reference, most games that involve a ball and an attempt for a team to get it from point A to point B share the same broad origins as a medieval peasant game played, in various forms, through much of Europe that was half Capture the Flag, half Big Ball of Violence.

Ironically, despite the violence of the game and the testosterone levels of the players, who are very rarely much less than six feet tall and even more rarely weigh less than eighty kilograms, they tend to be very polite to the referee. It can be very amusing to see a pocket-sized referee call over the Captains, usually two men the size of small tanks, each of whom could probably rip him in half with only minimal effort, and give them a stern talking to while they stand looking thoroughly humble and contrite, mumbling, "Yes sir", "No sir", "Sorry sir", "of course, sir" and "won't happen again, sir." This is in sharp contrast to Association Football where harassing the referee seems to be an unofficial part of the sport. This is in part down to the ref being much more willing and able to further penalise teams if they start annoying him, for instance by moving penalties 10 yards further up the field, and the greater power of the yellow card in comparison to Association Football (name goes in a book vs 10 minutes off the field, often a game-changer.)

Compare Blood Sport. See also Unnecessary Roughness, with which this trope sometimes overlaps. For information on the game, see Rugby League or Rugby Union. Yes, there are two different versions. Rugby Union is more widely played, while Rugby League is more popular in a few regions such as Northern England, New South Wales, and Queensland. Non-Australians also sometimes confuse rugby with Australian Rules Football, which has a similar reputation and all the more so because the players wear only singlets, and many believe that rugby was a major influence in the creation of Aussie Rules football. Believe it or not, James Naismith actually adapted some elements of rugby when he created basketball. In the US and Canada, Ice Hockey has a similar reputation as the most violent of the four major sports played in those countries, though the NHL has tried to crack down on the violence and tone down this part of the sport's image.

open/close all folders
Advertising
Anime & Manga
Comic Books
Comic Strips
Fan Works
Films — Live-Action
Jokes
The publican says, "This is a proud rugby-playing community. We often have a match between our local players." "Oh yeah? What's it like?" "I'll tell you what, the last match was something fierce. There was a broken jaw, several knees were stomped on, and we had five concussions and ten black eyes; hell, the local constable even made a dozen arrests afterwards." The bartender stands on the spot, looking wistful. "Oh, and some of the players also got into a fight, too."
Literature
Live-Action TV
Music
Puppet Shows
Radio
Tabletop Games
Web Comics
Web Original
Western Animation
Real Life
Feedback

And one player in the former is there as punishment for laughing in class.

And one player in the former is there as punishment for laughing in class.