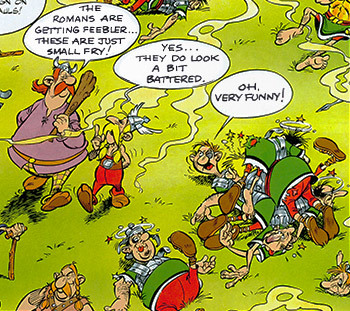 In Real Life, warfare is hardly an entertaining and carefree experience, and can seriously mess with kids' heads… not to mention their bodies. However, warfare and fighting can easily make for good, clean fun in entertainment media, and is often marketed to children. Most parents and Media Watchdogs are okay with media portraying Non-Lethal Warfare, regardless of the nature of the combat, its origins, the Fridge Logic or the Unfortunate Implications it may engender. No matter how lethal the weapons are, how dangerous the environment is, what the attitudes to enemy combatants and civilians are, no one gets hurt and no-one dies. At least, not on-screen.

Commonly, the combatants will use weapons or powers that stun or KO rather than kill, or at least have the option to. Anyone with more lethal weapons or power sets won't ever hit their target because the target knows Deadly Dodging. Lethal or destructive weapons will only hit the scenery or vehicles, and in the latter case, the crew will usually have ample time to eject or bail out first. Generally, the above will give the impression that things Could Have Been Messy were anyone playing for keeps or slightly sloppy.

We should mention the rules set out above assume that the setting allows for the possibility of death at all and that it can happen off-screen. If the target audience is too young even for that, the scale of Nerfed violence increases (er, decreases?). No one will use bladed weapons or guns (arrows might fly, though), traps, tanks, and other large scale weapons will be completely non-lethal, perhaps even designed to humiliate the enemy rather than knock them out. Likely "weapons" for use will be "energy" guns that are about as dangerous as laser tag guns… scratch that, less dangerous. Laser tag guns can at least potentially blind you. Or perhaps blunt weapons that "can't kill" because they don't cause bleeding.

This trope isn't an indicator of the quality of the on-screen fighting though, which doesn't need to be lethal or scarring to be entertaining. If it were to be considered "bad" it's only when it fails to carry Willing Suspension of Disbelief.

Compare with Bloodless Carnage and As Lethal as It Needs to Be. Contrast with how Snowball Fights and Paintball Matches are Played for Laughs with exceedingly 'gory' acting from the participants, especially when those involved act excessively militarily. Compare and contrast Nobody Can Die, where death is a narrative impossibility even when dealing with explicitly deadly weapons and situations.