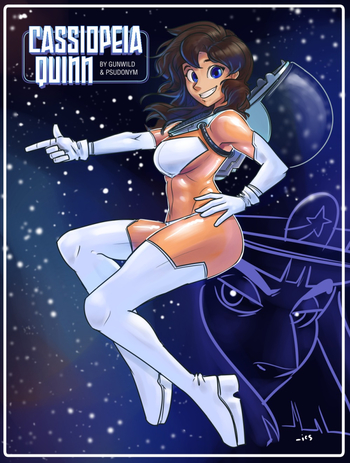 We were not kidding about her hatred of pants.
Advertisement:

is a Webcomic written by Gunwild and drawn by Psudonym.

Cassiopeia Quinn is a space pirate renowned for her complete disregard for the rule of law, her own safety, and pants, who plunders everything from trinkets to whole starships with the help of her best friend, Zeke the robot cowboy. Captain Madison Vrax is a young, up-and-coming officer of the Prime Galactic Navy, currently at war with the honorable warrior race known as the Vanaa. Their first encounter spawns strange alliances, new friendships, and a pursuit across the galaxy. The universe will never be the same...