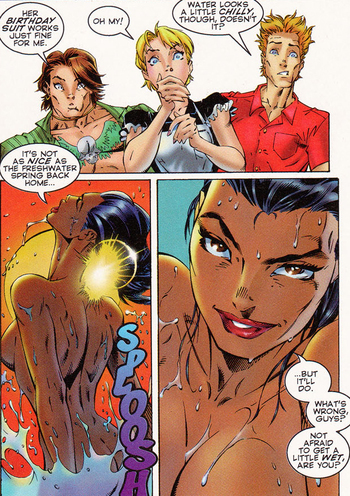 "This is the form in which a Kamui is able to unleash the most power! The fact that you are embarrassed by the values of the masses only proves how small you are! If it means fulfilling her ambitions, I will show neither shame nor hesitation, even if I bare my breasts for all the world to see! My actions are utterly pure!"
— Satsuki Kiryūin, Kill la Kill
Advertisement:

This is not "the exhibitionism trope" either, but rather "the knowingly unashamed trope". Exhibitionists expose themselves to others for their own self-gratification. In contrast, and akin to the Innocent Fanservice Girl, no matter how other characters and the audience may see it, she just doesn't see it as kinky.

The polar opposite of Reluctant Fanservice Girl, who is definitely embarrassed and bothered by it.

Needless to say, this does not apply where their state of undress is considered normal to begin with. If someone shows off acceptable amounts of skin regularly, visits bathhouses or hot springs frequently where nudity is to be expected, or uses the beach or other aquatic situations as an opportunity to wear bikinis (but not g-strings et al), that's not this trope.