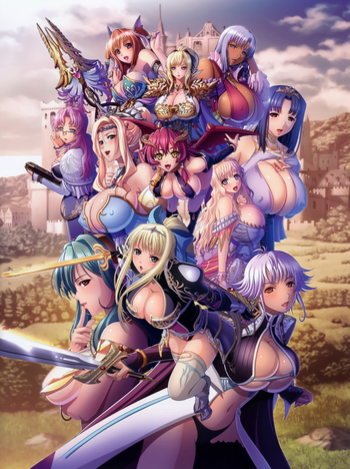 Funbag Fantasy (Kyonyuu Fantasy in Japan) is a series of H-Game visual novels with slight Dating Sim elements, developed by Waffle. Each title follows a male protagonist who begins with nearly everyone either looking down on him or being unaware of his existence, and who steadily increases his standing while accumulating a harem of inevitably busty ladies through a combination of his wits and a lot of luck.

The next game, Funbag Fantasy 2, is set in the same world as the original but takes place many centuries prior. It follows Ruin Dimidium, a young man in the Kingdom of Hillsland who starts in a similar situation as Lute, but rises thanks to the guidance of a royal duchess who can see great things in him that others refuse to.

The most recent game, Funbag Fantasy 3, takes place even earlier, in the setting's equivalent of Ancient Rome. Julinas, the god of Boobjobs, is summoned to the human world to save a town at the mercy of a girl cursed into a monster. He takes the opportunity to explore his new surroundings and pursue the fetish he represents, in the process gaining followers and faith in his godhood.

The first game was adapted into a short OVA in 2012.