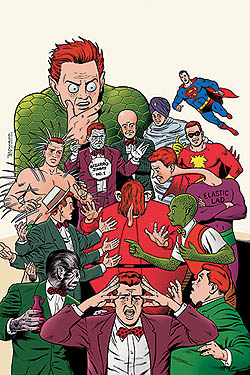 Either Jimmy is freaking out over his transformations or he's trying out his new mental powers.
Also: take thirteen shots.

"Introducing JIMMY OLSEN...
He's a MASTER of DISGUISE:
He's DEVIL! He's a GANGSTER!
He's a dozen other guys!
He's a BEARDED BOY, a MARTIAN,
A ROCK-'N'-ROLLER and a CLOWN...
TEXAN, CAVEMAN, GIRL and ROBOT...
Man, he really goes to town!
He's a KNIGHT and he's a CONVICT--
(Though it's only for a gag!)
Why, he's even SUPERMAN
In this, his latest GIANT mag!"
— Advertisement for Jimmy Olsen Vol. 1 No. 95