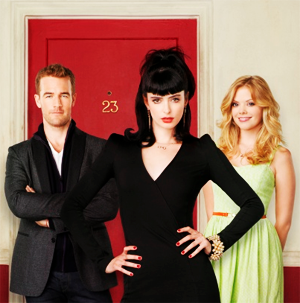 Bitch is the new... roommate.
"My name is June Colburn. Since moving to New York, I lost my job, my apartment and my fiancé. Now I'm living with this girl Chloe, who may or may not be a sociopath. Chloe is best friends with the actor James Van Der Beek. There's this weird girl who lives down the hall, Robin, who's obsessed with Chloe, and Eli, the pervert next door."
Advertisement:

Don't Trust the B---- in Apartment 23 is a Sitcom that aired on ABC. The show premiered on April 11, 2012, taking over the timeslot Happy Endings occupied after its second season wrapped.

June Colburn (Dreama Walker) has her life all figured out: just out of grad school, she secures a high-paying job with a Wall Street investment firm, complete with an upscale company-provided apartment in New York City. In five years, she'll be a senior analyst married to her high school sweetheart with three kids and a house in the suburbs. Except that by ten o'clock on her first day, she's jobless and out on the street after her boss is implicated in an embezzlement scheme and her new apartment is seized by the government.

Desperate not to return home to her overbearing Midwestern parents (who keep reminding her of the second mortgage they took out for her education), June's search for a new job and a place to live leads her to Chloe (Krysten Ritter), The Bitch in Apartment 23. Chloe is glamorous, exciting, inexplicably BFFs with James Van Der Beek—all in all, the perfect roommate...until June learns that Chloe is actually a sex-crazed alcoholic con-artist with the morals of a pirate who regularly scams naive newcomers into laying down several months' rent before driving them off with her sociopathic antics. But June proves more than capable of holding her own against Chloe, earning her begrudging respect and (maybe) even her friendship.

The show lasted for two wildly disjointed seasons (ABC never found a niche in its line-up and kept airing many episodes out of order) until January 22, 2013, when James Van Der Beek announced via Twitter that the network had pulled the series and would not be airing the eight episodes already filmed: "Translation: We've basically been cancelled." The remaining episodes would survive in syndication abroad and were eventually aired in the States on the Logo Network.

I'm not perfect and no snitch, but I can tell you these tropes are a B: