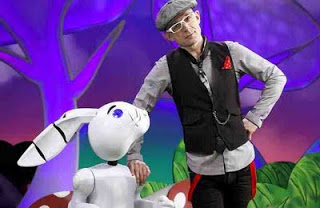 Highly surreal 2011 BBC Game Show that seems like it could've only been the result of either being under the influence of some type of hallucinatory product, or strategy sessions with Jay Wolpert.

It involves two teams of three contestants, who compete in varying forms of equally surreal challenges set in an "underground forest", where the objective is to not scare the Hare. This occurs if a team gets three faults on a particular challenge, which will trigger a loud noise, and thus scare the Hare. The hare, for the record, is an animatronic rabbit with wheels.

Winning games earn carrots (first two rounds offer 3, last round is head-to-head), and the winning team gets to play what essentially is a stylized "get three out of five questions and win" round. Winning gets your team £15,000, which is only £5,000 more than what you can win by yourself on Total Wipeout.

Nine episodes were produced, but the BBC canned it after just six aired (the other three were quietly burnt off in the mid-afternoon later in the year). Some critics thought it was a bit too weird, some thought it would work better as a kid's show, and many viewers were surprised when they heard that the show was not just a one-off for Easter weekend.