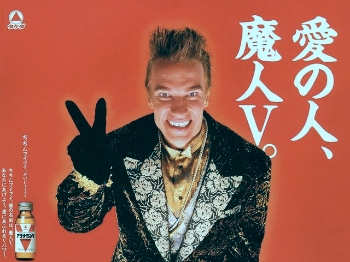 Celebrities appearing in crass, potentially embarrassing, or shoddy commercials that only air in a place far away from their normal stomping grounds.

Japan commercials can be fun at first, but they have more juice

to the emotion barriers.

A celebrity may be willing to do certain things for money, but they'll also have a set of standards for what they'll do. You may think it's reasonable that they have their principles, but you forgot that most successful celebrities sold their principles and sense of shame bundled with their soul and 92-year-old grandmother in a package deal made at a crossroads to a gentleman of considerable wealth and taste.

Deep down, not all successful celebrities believe that there is No Such Thing as Bad Publicity, instead they are able to recognize (or pay their agents to recognize) that doing something embarrassing or "beneath" their standard for some short term bucks can become a Never Live It Down that harms their long term prospects and marketability. They will refuse crass or embarrassing uses of their time. The one exception: if it is done very far away where no one will see it. And by "no one", we mean "no one who speaks English", and by "very far away", we usually mean "Japan".

Some celebrities are also willing to do foreign commercials as a way of keeping themselves visible in that market, when they don't have a movie being released over there at the time. Doing talk shows and TV appearances in their home country is feasible since they don't have to travel very far. Doing talk shows in a hundred different nations every other month would be nearly impossible. With a commercial, they only have to shoot it once, and it will be aired fairly often.

A trope that exists in the behavior of celebrities (actors/singers/etc.), and is also picked up readily by those in the industry and reflected in the works they make: A celebrity goes over to Japan, possibly somewhere else, and then does a fairly embarrassing job clearly made only for the cash and in the belief that, due to the language barrier and the lack of appeal of a Widget Series, nobody back home will see it.

If it ends up on YouTube, it quickly becomes an Old Shame, which is why many have it written into their contracts that they can't have it be spread around. Because it is all too easy for these commercials to be leaked onto the Internet nowadays, this is likely on its way to becoming a Discredited Trope, if it isn't already. The term itself is a portmanteau of "Japan" and "Pandering". Compare Embarrassing Ad Gig.

When Gumball refuses to be in a Joyful Burger commercial even though the Watterson family is completely broke, his mother Nicole suggests they do it in another country.

When Gumball refuses to be in a Joyful Burger commercial even though the Watterson family is completely broke, his mother Nicole suggests they do it in another country.