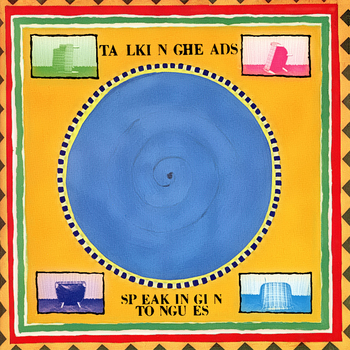 "Home: it's where I'd like to be, pick me up and turn me 'round..."
Click to see the limited-edition cover, designed by David Byrne and Robert Rauschenberg 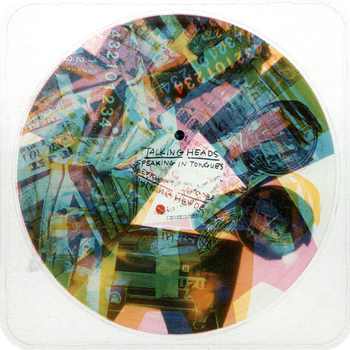 Speaking in Tongues, released in 1983, is the fifth album by American Post-Punk/New Wave Music band Talking Heads. Their follow up to the massively-acclaimed Remain in Light, the album continues its direct predecessor's blend of Post-Punk and New Wave Music rhythms and Afrobeat riffs, orienting them in a more electronic, mainstream-friendly direction while still remaining decidedly weird. It was also both the band's first self-produced album and their first since Talking Heads: 77 to not be produced by Brian Eno, who had ceased working with Talking Heads after the Troubled Production of Remain in Light in 1980. Still, several members of the touring band for the previous album returned for Speaking in Tongues and its associated tour, including Parliament-Funkadelic keyboardist Bernie Worrell, backing vocalists Dollette McDonald and Nona Hendryx (album only), and percussionist Steve Scales.
Advertisement:

The album marked something of a turning point for Talking Heads. Previously, their albums had gotten progressively more experimental, in no small part due to Eno's production work; somewhat telling is the fact that Eno had just gotten back from working with David Bowie on "Heroes" when he met Talking Heads, and the emphasis on artsy, Progressive Rock-tinged experimentation that permeated Bowie's work in the late 70's carried over heavily into Talking Head's second, third, and fourth albums. While Speaking in Tongues carried on with the funky worldbeat style of Remain in Light, it instigated a shift to a more accessible direction that would continue with the band's later output, a trend that wouldn't be broken until the band's final album, Naked. Despite this, the band wouldn't outright abandon the weirdness that made them stand out, but later albums would definitely be a world away from their work with Eno.

On a more trivial note, this album was one of the first to take advantage of the larger capacity and rising sales of the Compact Cassette format, with cassette releases of the album featuring extended versions of the tracks "Making Flippy Floppy", "Girlfriend is Better", "Slippery People", "I Get Wild/Wild Gravity", and "Moon Rocks", resulting in this version running approximately 6 minutes longer than the LP release. Curiously, the shorter version of the album would also be used for initial Compact Disc releases of the album despite the CD having an even greater capacity than the Compact Cassette (Warner Music Group in general seemed to have cold feet towards CDs for a good chunk of the 80's), with the full version not arriving on the format until 1990 (albeit only in North America); this longer version would also be used for the 2005 remaster campaign of Talking Heads' back-catalog in all regions, which would also carry over to digital versions.

Speaking in Tongues was another commercial success for Talking Heads, becoming the band's highest-charting album on the U.S. Billboard 200, peaking at number 15, and their fastest-selling, going double-platinum in the United States in just three years; it was also certified platinum in Canada and New Zealand. Lead single "Burning Down the House", meanwhile, was the band's biggest commercial hit: peaking at number 9, it was their only single to reach the U.S. Billboard Top Ten. The tour conducted to support the album, a tour which turned out to be their last, was documented in the concert film Stop Making Sense in 1984.

Speaking in Tongues produced three singles: "Burning Down the House", "Swamp" (released exclusively in the Netherlands, Australia, and South Africa), and "This Must Be the Place (Naive Melody)".