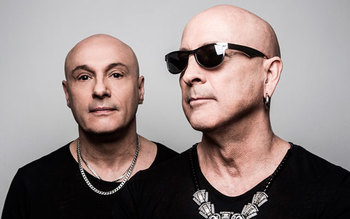 Not too sexy for a page image.
Advertisement:

The brother have been in the music industry since the 1970s, beginning as The Actors. Richard also had an extensive history as a session player for other British pop acts, including Mick Jagger, Boy George and David Bowie (he appears in the music video for Bowie's "Blue Jean"). They released their debut album Up in 1992 after the success of their afore-mentioned hit single, "I'm Too Sexy." Though yet to top their first big hit, they continue to record and perform new music to this day.