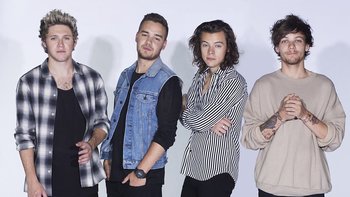 One Direction (commonly initialized as 1D) is a British-Irish Boy Band formed in London, England. Originally, the boys auditioned for the seventh series of The X Factor as individuals. They were assembled into a group by Simon Cowell, who became their mentor throughout the show. After placing third, Cowell signed One Direction to his own record label in 2010.

Since then, the band has skyrocketed to worldwide fame, releasing many hit singles, winning numerous awards, and unseating Justin Bieber as the biggest teen heartthrobs in the world. After five years of world domination, 1D have become the most successful boy band to ever come out of either the UK or Irelandnote Not counting, of course, The Beatles, whose status as a boy band is highly disputed.

Members of One Direction:

Tropes about their works: