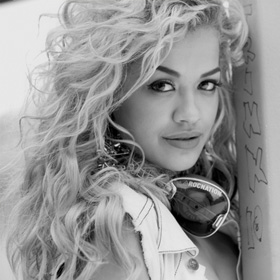 Rita Sahatçiu Ora (born 26 November 1990 in Pristina, SR Serbia) is a Kosovo-born British singer-songwriter and actress. She attended Sylvia Young Theatre School (whose notable alumni include Vanessa White of The Saturdays, Amy Winehouse and Billie Piper) and worked with musicians such as Craig David and Tinchy Stryder before going on to audition for the 2009 Eurovision Song Contest. However, she later withdrew due to "not feeling ready" for the competition.

Events soon took a turn for the better as she signed up with Jay-Z's label Roc Nation alongside fellow Brit starlets Sugababes. She began appearing in videos with the likes of Drake and Jay-Z himself, and released her debut single "Hot Right Now" (a collaboration with DJ Fresh) which topped the UK Charts. This was followed by two other UK number ones, "R.I.P" (featuring Tinie Tempah) and "How We Do (Party)". These singles were also relatively successful overseas, especially in Australia.

Ora released her debut album, Ora, throughout most territories in August 2012. There were plans to release the Deluxe Edition in the US as her first album in the American market but as of 2014 this appears to have been scrapped in favour of her second studio album becoming her official American debut.

The first single from her second album I Will Never Let You Down was released in 2014 and she also collaborated with Iggy Azalea on her single Black Widow the same year.