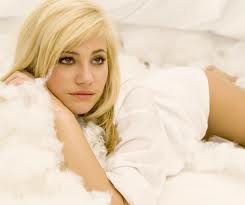 What do you take her for?

Born in Kent and attending the prestigious Italia Conti stage school until she was 18 (where she received roles in stage productions The Sound of Music and Chitty Chitty Bang Bang), she first came to prominence in mid-2009 with her debut single "Mama Do", which was the first time a British female in the Turn of the Millennium who was not from a Reality Show or Talent Show scored a debut number one. She released her debut album, Turn It Up, in September that year. It peaked at number six on the British albums chart and eventually went two times platinum. She released her follow-up album, Young Foolish Happy in November 2011. As of 2012, it has been certified Gold.

She released her third, self-titled album on the 1st of August 2014.

Though she is known throughout the UK, Europe and parts of Asia as being a popstar, in North America she is better known for her role as Judy in the Fred movie (her film debut).

After releasing her third studio album and finishing a run as Holly Golightly in the West End production of Breakfast at Tiffany's, she has taken a break from music to focus on modelling and running her own stage school (a subsidiary of Italia Conti).

Tropes about this musician and actor include: