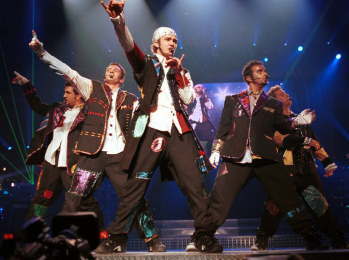 All girls want band boys.
"A boy band is usually five, sometimes three, never four (for some reason) unless somebody leaves. Usually no instruments, sort-of club tracks that would've been huge in Europe a few years before, involved choreography, all five members have five distinct personalities. They just had incredible charisma, you know, and a 13-year old girl will lose her mind."
Dave Holmes, The Boy Band Con: The Lou Pearlman Story
Advertisement:

A very specific kind of five-man vocal group. Typically, you're in a Boy Band if you began recording while still in your teens; if you and your bandmates are all extremely pretty; if few, if any of you, play instruments; if your boss is a large and often intimidating man; if you can't get any respect from the Serious Music Critics; if you have a hard time crossing over to an adult audience; and especially if the girls can't get enough of you. Can generate a Periphery Hatedom when a boy band is popular enough.

You definitely were in a Boy Band if, years and years after the fact, your fandom looks back on your early albums as an embarrassing phase, Guilty Pleasure, So Bad, It's Good, or (if it's old enough) Camp. Songs from said groups often qualify as Silly Love Songs, many of them trying to convey warm and fuzzy feelings.

The term "boy-band" is generally reserved for groups which are assembled by a record company or other entity, whereas most bands form organically (although there are exceptions, in both directions). Some of the tropes and musical stylings typical to Boy Bands started with The Monkees and several other groups of The '60s era. note  Technically, they could be considered boybands as well, but they are missing several of what are generally considered important aspects of the "boy-band" — see below When most people hear "Boy Band" they tend to think of the late-80's — late-90's bands listed below.

Most Boy Bands follow a particular Five-Man Band archetype, established by New Edition and New Kids on the Block, that differs from the traditional one used on this wiki. It is as follows:

In the examples below, you'll notice very few black R&B groups are included such as Jodeci or Blackstreetnote It's worth pointing out that they predate the Backstreet Boys by several years. However, after the latter group's success, they started stylizing their name as "BLACKstreet"., despite having similar appeal. This is because they generally don't fit the mold of a boy band: they're more likely to form among themselves, less likely to follow the Five Man Band archetype as explained above, and are more likely to have rougher edges (Parental Advisory stickers are not unheard of), making them slightly more appealing to males.

Although they are not very famous outside Asia, Japan has been creating boy bands since The '70s. The most notable boy band factory is Johnny's Jimusho, which currently manages about fifteen boy bands. Today Johnny's bands dominate the charts, with SMAP and Arashi topping pretty much constantly. Dramas that famous boyband members star in pretty much always do well, and you will see members of popular boybands on TV variety shows quite a lot. The boyband machine is so well-oiled in Japan that many of the tropes applied in the West don't function — boybands have large adult followings (usually middle-aged women) and men seem to be able to handle it, if not love it — you WILL sing A-RA-SHI many times in karaoke in mixed company, just because everybody knows it.

Lately, Korea has been getting on the action too with bands like DBSK, 2PM, SHINee, B2ST, U-KISS, Super Junior, etc. This goes hand in and with the general k-pop explosion of the late 00s and the past few years. They're significantly more popular in the Western world than the Japanese boy bands. By far the biggest of them all, though, is BTS, who has been been considered the biggest boy band in the world ever since One Direction went on hiatus. Still, there are other K-pop boy bands that have growing fanbases all over the world. In fact, Korea has fully embraced this trope the last few years, with tens of boy bands being active at the same time, many of which have fandoms both in and outside Korea. There are new ones debuting constantly, and some already have followings before they officially have their debut.

The boy band scenes are noticeably different in the US and the UK:

Boy bands are a major source of Real-Person Fic (a subgenre called bandslash), where you basically have one of two types: Female OC woos band member, or the band members woo each other. In Japan, the majority of RPF Doujinshi are bandslash.

Most boy bands tend to last around five years before members are released from their contracts (or they simply expire) because something else has come along or because they simply got too old to meet the "boyish" requirements. Depending on the success of their subsequent individual projects, many re-form 15-30 years after their heyday to cash in on their now-nostalgic original fandom — this phase can last decades. Expect at least one Replacement Goldfish for a member who's become a successful solo artist/died young/has a non-entertainment career they don't want to walk away from for the time necessary to record an album and go on tour.

To some extent, Boy Bands were preceeded in the late 50s and early 60s by 4-man bands singing harmonic and acapella/Doo-wop tunes like The Four Freshmen, the Drifters, or Jay and the Americans