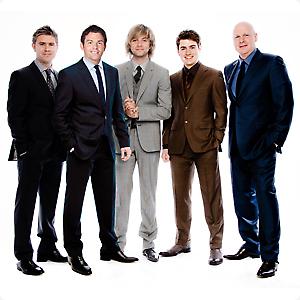 The Spear Counterpart to Celtic Woman.

Formed in 2007 by producer Sharon Browne, Celtic Thunder is an all male ensemble comprised generally of five members. (The number has fluctuated a bit over the years, but currently sits at five.) Their first show was performed at the Helix in Dublin and sold as a DVD. The show was aired on PBS and all subsequent productions have done so, usually around St. Patrick's Day or during pledge drives. The music varies from traditional Irish music to folk songs to contemporary. One show, "It's Entertainment," focused more on pop hits. Until 2011, composer Phil Coulter was the musical director for the group and often composed original pieces for the group or its members to perform. They are incredibly popular in North America, with a larger following than people may suspect. They have constantly topped the World Billboard Charts.

The shows (and their corresponding CDs) are:

Storm is different than the other shows and has never toured. Comprised mostly of original music by Coulter, it is the only show so far to have a storyline. It tells of a clash between villagers and the gypsies camping outside their village, with three main subplots. The Gypsy King argues with the villager known as the Highwayman who is also romancing the king's sister. At the same time, the highwayman is locked in battle with a young villager who wants to prove he's an adult. In the third plot, a lost noblewoman catches the eye of the landowner's son, who the chief hopes will marry his daughter.

The current members of Celtic Thunder are:

Neil Byrne: From County Wicklow. Ascended Extra, in a way. Neil started as a guitarist and percussionist in the band, also providing backup vocals. He slowly was given solos and was promoted to principal singer in 2011.

Ryan Kelly: From the County Moy, Northern Ireland. One of the original members, Ryan has some theatrical background and tends to play the "bad boy."

Emmet Cahill: From County Westmeath. A classically trained singer, Emmet joined the group in 2011. On January 13, 2014, Emmet announced he was leaving Celtic Thunder. He came back as a guest a few months later to pay homage to George, who had passed away. He returned full-time in late 2015 when Colm departed.

Damian McGinty: From Derry, Northern Ireland. One of the original members. Joined Celtic Thunder at the age of 14. Went from singing pop songs like "Puppy Love" to songs like "Home" as his voice lowered. In 2011, he participated in the first season of The Glee Project and eventually won along with Samuel Larsen. He played Rory on Glee during Season 3, causing him to resign from the group. Damian rejoined as a guest singer for the Very Best tour in 2015, and rejoined full-time for the Legacy tour in 2016.

Michael O'Dwyer: Joined in 2016 to replace Keith. From Carrick on Suir in County Tipperary.

Former members of Celtic Thunder include:

Paul Byrom: From Dublin. A classically trained tenor, Paul tended to play the romantic one of the group. He resigned after the 2010 Fall tour to focus on his solo career.

George Donaldson: From Scotland. One of the original members, George has covered several songs from ballads to pop standards. On March 12, 2014, George passed away from a massive heart attack at the age of 46.

Keith Harkin: From Derry, Northern Ireland. One of the original members, Keith has covered songs ranging from folk to rock. He departed during the 2016 Legacy tour to spend more time with his new wife.

Colm Keegan: Fresh off his audition, Colm was asked to perform with Celtic Thunder in their Atlantic City engagement July 2012 while Ryan Kelly recuperated. Colm stayed with the group until late 2015, when he took a break to finish his studies.

Emmett O'Hanlon: Replaced Emmet Cahill in 2014, before departing in 2016 to focus on his opera career. Notable as the only member of the group not from Scotland or Ireland; he is Irish-American.

Other members of Celtic Thunder: